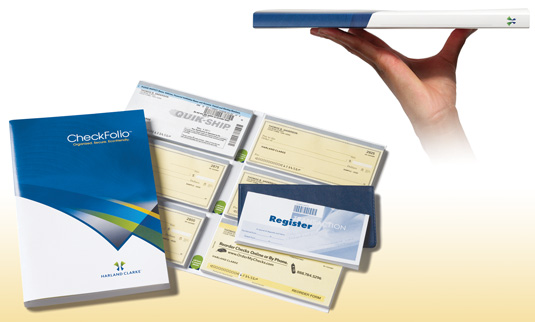 Thinking Outside the Checkbox: Sleek New Package Ushers In a New Era of Check Packaging and Storage

Sometimes an old way of doing things is so ingrained that we can’t conceive of another method. That is, until an innovation comes along, so intuitive, that it’s hard to believe we ever functioned without it.

A staggering 94% of respondents preferred CheckFolio to the traditional checkbox.

The slim and trim CheckFolio, measuring 10 inches by 6.5 inches, looks like a book jacket or notebook, its spine only a half-inch thick. But open it up, and you won’t find pages. Instead, secured inside are removable checkbooks, neatly aligned left and right, giving consumers a brand new system for receiving and storing checks. And just like that, the traditional consumer checkbox — like the manual typewriter and the rotary dial telephone — is destined to become a memory.

“One consumer told us that it’s like putting wheels on a suitcase,” says Gwen Cuffie, vice president of marketing solutions and products for Harland Clarke. “We all had that ‘wow’ moment when we wondered why nobody ever thought of this before.”

Yet for all its magic, CheckFolio — which can best be described as an enhanced and re-engineered check system that vastly improves the account holder experience — actually is the result of years of meticulous development that included extensive research and consumer testing.

As Cuffie explains, Harland Clarke has been aware of a growing need to start delivering checks in a slimmer package. “A few years ago, our shipping networks began investing in equipment to automate the delivery of flat packages. Ultimately, this meant that shipping three-dimensional parcels like the checkbox would become inefficient. We needed to innovate in order to better serve our clients.”

So Harland Clarke made a commitment to re-engineer the checkbox. But while the driving force for the introduction of a slimmer check package was the planned automation of shipping networks, the result — CheckFolio — has turned out to be so much more. As is often the case with innovation, working to solve one problem ended up solving others as well.

“At first we were concerned that consumers might find a new approach to be disruptive and they would not be willing to make a shift to the CheckFolio concept,” Cuffie says.”What we didn’t realize was just how much they would love it.”

Harland Clarke’s investment in quantitative and qualitative packaging research was considerable and far-reaching, including national video surveys, end-of-check-order surveys, product preference surveys, focus groups and client forums. The company asked more than 1,000 consumers for their opinions about and preferences for various check package prototypes, and researched the check delivery needs of banks and credit unions.

The best part about CheckFolio for Harland Clarke’s clients is that account holders assume their financial institution invented the idea.

What Harland Clarke found was that consumers literally wanted out-of-the-box thinking. “It turns out that they wanted more than what a checkbox offered,” says Cuffie, adding that consumers desired secure packaging, a more organized check system, a more simple and eco-friendly package, and more home storage flexibility.

The CheckFolio prototype repeatedly came out on top, and the research speaks volumes. A staggering 94 percent of respondents preferred CheckFolio to the traditional checkbox.¹ Only a very small minority — 6 percent — preferred the box. And nobody preferred loose checks with the build-a-box solution already in the market through another check printer.

Furthermore, Harland Clarke researchers asked respondents to rate CheckFolio against the traditional checkbox and the flat build-a-box package on a scale of 1 to 10, with 10 being the highest. The average rating for CheckFolio was 8.1, more than double the 3.2 rating given to the checkbox and almost four times the 2.2 rating given to the build-a-box package.

“The bottom line is that account holders see CheckFolio as not just a check packaging option, but as a welcome and much-needed financial organizational tool,” says Cuffie, who believes the CheckFolio system will soon become the predominant design in the industry.

Long Live the Check
CheckFolio couldn’t have come at a better time. Checks are an important payment vehicle for most account holders and a key account holder engagement tool, according to Javelin Strategy & Research’s 2011 State of the Check study. Javelin found that the value of each check written has skyrocketed to 10 times that of a debit card charge, and that more emotion is tied to checks than to other payment forms.

And, according to a Javelin white paper, Facing Durbin: Enhancing DDA Value With Check-based Solutions, checks continue to be important for consumers, which means they should be important to financial institutions. A primary banking relationship anchored with a checking account is strongly associated with the use of multiple financial products and higher account balances. There is a positive correlation between profitable account holders and active check writers.²

“Clearly, checks and debit cards are not synonymous for consumers,” says Cuffie. “Check writing is viewed as the more important activity. Likewise, it makes sense for a system like CheckFolio to elevate the way we expect our checks to be packaged, used and stored.”

Financial Institutions Get the Kudos
The best part about CheckFolio for Harland Clarke’s clients is that account holders assume their financial institution invented the idea. “We’re investing in the innovation, but our clients get all the credit,” says Cuffie. “And we wouldn’t have it any other way.”

Indeed, account holders find CheckFolio to be so engaging that they credit their financial institution with being “forward thinking” and “caring about their customers.” That, according to Cuffie, is a key part of Harland Clarke’s commitment to improving the account holder experience and boosting account holder engagement.

According to Cuffie, 2012 will be a transitional year for the introduction of CheckFolio and, for now, financial institutions should alert account holders that their checks may be arriving in a new slim, green package. Once the transition is complete, she sees a variety of potential ways for banks and credit unions to use CheckFolio to foster the check-writing relationship. “Print on demand may enable us to digitally print CheckFolio jackets, ultimately creating more options for branding and messaging for our clients in ways we never could have done with the checkbox,” she says. The new platform also paves the way for other secure fulfillment opportunities. For example, Harland Clarke’s patent application describes a WelcomeFolio containing checks, debit cards and marketing materials.